“Alliance brought an unexpected result, compared to the forecasts, we achieved a much better result,” said its president, Krisztián Forró.

On October 29, 2022, Slovakia held county and municipal elections in which Alliance (Szövetség, in Hungarian) achieved historic success. The political coalition of the three parties representing the interests of the Hungarian minority was formed in 2021.

Alliance now holds 54 seats at the county level, 12 more than previously. In 2017, during the previous elections, two of the predecessor parties of Alliance (Party of the Hungarian Community and Most-Híd) won only 42 seats combined.

In the municipal elections, of the 263 mayoral positions won by the party, Alliance will hold 222 offices independently, and 41 in coalition.

Based on a survey of parliamentary elections conducted between November 2nd and 8th, for the first time since the establishment of the party, Alliance is polling at 5.6 percent, which is above the minimum threshold needed to gain seats in the Slovak Parliament. If the trend holds, the party could possibly join the Slovak legislature with 10 seats when parliamentary elections are held in 2024. 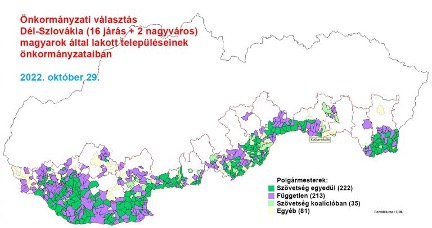