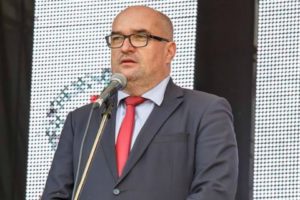 Mihajlo Holovko, leader of the Ternopil County Council in Ukraine incited against the Hungarian minority in Sub-Carpathia during a live TV broadcast, September 28, on Channel 24’s “This Morning” show.

Mihajlo Holovko said – among other things – that the Sub-Carpathian Hungarians „have to be hit hard, and whoever has Hungarian friends doesn’t need enemies”.

According to László Brenzovics, President of the Hungarian community’s representative party (KMKSZ) Holovko’s statement encourages the people to intimidate and discriminate against citizens of other ethnic backgrounds than Ukrainian. Mr. Brenzovics has called on the Prosecutor General to investigate this violation of Ukraine’s Criminal Code Article 161, Paragraph 2.