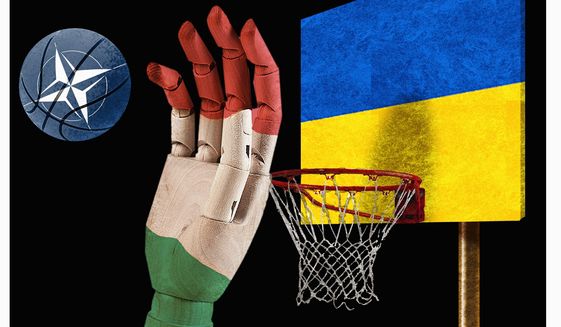 Since 2018, Hungary has been blocking ministerial-level political meetings between NATO and Ukraine as a sign of protest over Ukraine violating the human rights of its ethnic minorities. In light of the permanent Russian threat from the east, foreign policy experts and opinion leaders have in turn been calling Hungary the “Trojan Horse for Russia” within NATO. They see Hungary’s stance as an assistance to President Putin’s plans to block Ukraine’s Western integration and one undermining the unity of NATO in providing support for Ukraine.

This narrative, however convincing, is false. Those who really want to understand the region’s dynamics and Ukraine’s unique challenges need to dig deeper to find a more complex picture.

What exactly happened in Ukraine that is causing Hungary’s objection?

In 2017, the Ukrainian Parliament passed a new Law on Education which limited the already existing rights of ethnic minorities to be educated in their native language. Two years later, a new State Language Law was adopted proclaiming use of the Ukrainian language compulsory in all spheres of public life. As a result, historic minority languages, with a few exceptions, can only be spoken in private communication or during religious events.

Hungary is not the only country concerned about the new Ukrainian anti-minority practice. Although the main goal of the new legislation was to tackle Russian influence in Eastern Ukraine, Ukraine — as a collateral damage — obstructed the use of all minority languages, including Bulgarian, Greek, Hungarian, Romanian and Polish. The kin-states of these respective minorities all protested against the new language regime, while several international organizations also raised their voices against the new legislations, including the Council of Europe, the Venice Commission, the European Union and the NATO itself.

From the perspective of the United States, the new Ukrainian legislation might seem reasonable. After all, in America, although ethnic minorities can freely use their mother tongue in private conversations and in their own local communities, the language in the public sphere is primarily English.

This simple approach, however, cannot easily be applied in Central and Eastern Europe’s complex ethnic relations for objective historical, cultural and constitutional reasons. What works in America does not necessarily work in other parts of the world.

First, “ethnic minorities” in the United States and Central and Eastern Europe are not comparable. To stick with the Hungarian example, there are approximately 2 million ethnic Hungarians who live in Hungary’s neighbor countries whose mother tongue is Hungarian. They became citizens of these states as a result of the border changes after the two world wars, including some 150,000 ethnic Hungarians in Subcarpathia. The borders moved, not the people. My great-grandfather, for instance, was born in 1919, and was the citizen of five different states without leaving his village in today’s South Slovakia where his ancestors lived for centuries.

In contrast, American minorities, with the exception of African Americans, the Native American population and Hispanics living in the Southern states, became minorities as a result of their own decision by immigrating to the U.S. Therefore, it is a legitimate expectation that they adjust to the norms of their chosen homeland and use the English language in public relations, and even then, non-English languages are often accommodated. But forbidding people to use their mother tongue in their own homeland, just because it came under the authority of a different state due to geopolitical events, is a whole different ballgame.

Second, one of the hardest lessons learned from the 20th century is that the stability of multiethnic Eastern Europe is contingent upon the protection of the rights of national minorities. The most fundamental of such rights, having long-standing traditions in Central and Eastern Europe, including Ukraine, is the opportunity to be educated in the mother tongue.

This, of course, does not mean that national minorities in Ukraine, for example, are refusing to learn or speak the official state language. There is a mutual understanding that every citizen, regardless of their mother tongue, must properly speak Ukrainian. However, the new Ukrainian legislation, instead of improving the quality of teaching Ukrainian for ethnic minorities, poses a serious threat to the very existence of national minorities in Ukraine.

Third, Hungary has a special bond to ethnic Hungarians living beyond its borders — just like other countries in Central and Eastern Europe. The well-being of these communities, including ethnic Hungarians in Subcarpathia, has always been important for Hungary. This is, in fact, not only the priority of the current government but also an obligation under its Fundamental Law dating back to the country’s independence.

Since taking away the most fundamental language rights of the community is a clear violation of this principle, Hungary’s reaction was quite foreseeable. All actors in the region were aware of this sensitivity, Ukraine knew that its move would strike a nerve in Budapest.

Here we come back to Russia, which is a key player of the dispute.

In fact, it is not Hungary who is following Mr. Putin’s playbook, but, unintentionally, Ukraine itself. Depriving people belonging to minority groups of their fundamental rights, and creating tense interethnic relations by speaking against minority rights, or tolerating hate-speech by Ukrainians against ethnic minorities, advances Mr. Putin’s goal: a destabilized, weak Ukraine. Is it really a coincidence that the latest anti-Hungarian provocations in Subcarpathia were ordered by Russian provocateurs?

Finally, why doesn’t Hungary address the issue in international human rights organizations or the European Union instead? NATO is not only a military cooperation, it is an institutionalized group of nation states sharing the same values, including the respect for the human rights of national minorities. Ignoring these values — in this specific case, leaving the clear violation of the human rights of ethnic minorities unanswered — would provide a dangerous precedent for the community and the whole region as well.

Hungary has always been a strong supporter of Ukraine’s sovereignty and territorial integrity, as well as its Western integration, and thus, it is ready to restore its full support for Ukraine if the human rights of ethnic Hungarians are again fully respected. There are some developments in this matter, but there is still a long way to go.

What Mr. Biden should emphasize to Mr. Zelensky during their upcoming meeting in Washington is that Ukraine’s standpoint is not only inappropriate from a principle-based point of view but it counters Ukraine’s own national interests, too.

We all know what an expanding Russia looks like, and that we can resist Russian oppression only if we stick together. It is time to do so.

Balazs Tarnok is Hungary Foundation’s Visiting Research Fellow at the Kellogg Institute for International Studies, University of Notre Dame. He is a researcher at Europe Strategy Research Institute of Ludovika-University of Public Service, Budapest.